Are bats related to birds?

Bats and birds both can fly, yet they developed this ability independently. They belong to different animal classes; birds are in a class called Aves while bats are in the class Mammalia. Bats are mammals, just like humans, which means that all bats are warm-blooded, have hair, bear live young, and feed their babies milk.

How do they move around in the dark? 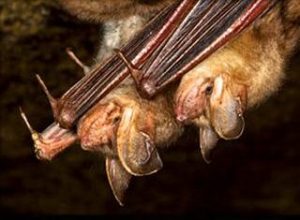 All bats can see, but some use a special sonar system called echolocation. These bats make high frequency calls either out of their mouths or noses and then listen for echos to bounce from the objects in front of them. They are able to form pictures in their brains by listening to reflected sounds just like we form pictures in our brains by interpreting reflected light with our eyes. In this way, bats are able to comfortably move around at night, avoiding predators, maneuvering around obstacles, locating their food, and capturing insects in total darkness.

Why do they hang upside down?

Unlike the bodies of other animals, a bat’s body is best adapted for hanging upside down. Its hind limbs have rotated 180 degrees so that its knees face backwards. This rotation aids in the bat’s ability to navigate in flight and to hang by its feet. Bats actually have specialized tendons that hold their toes in place so that they are able to cling to their roosts without expending any energy. In fact, bats must flex their muscles in order to let go of the roosting surface. These adaptations are quite helpful for a flying mammal since bats only need to let go of the roost in order to drop into flight. Hanging upside down also provides bats with roosting space away from predators in safe places on the ceilings of caves, in trees, and buildings that few other animals can use because they have not evolved to hang upside down by their feet.

What do they eat?

There are more than 1,100 different species of bats in the world, living on every continent except Antarctica. Each one has developed special adaptations for how it lives and what it eats. For example, 70% of all the bats in the world eat insects and many of them use echolocation in order to find food and move around in the dark. Many small insectivorous bats can eat up to 2,000 mosquito-sized insect in one night. These bats are able to eat so much because they have high metabolisms and expend lots of energy in flight. Frugivorous bats living in tropical climates have very good eyesight and sense of smell for finding ripe fruit to eat. In the desert, there are nectar-feeding bats which have long noses and tongues for harvesting nectar from flowers, as well as special enzymes for digesting the high-protein pollen that accumulates on their faces. Carnivorous bats have sharp claws and teeth for catching small vertebrates such as fish, frogs, birds, or rodents. A few Latin American bats, the vampires, eat only blood.

How do vampire bats suck blood?

Vampire bats do not actually suck blood. They lap it up like a dog drinking water from a bowl. To begin feeding, the bat first must prick the animal with its two large front teeth, often in the foot or leg of a sleeping mammal or bird. An anticoagulant in the vampire’s saliva causes the blood to flow without clotting, allowing the bat to lick up its nutritious, protein-filled diet. Vampires take only 2 tablespoons of blood while the host animal continues to sleep. There are just three species of vampire bats in the world and they all live in Latin America. They are very gentle creatures and will adopt orphans and regurgitate and share food for a member of the colony who could not find a meal the night before. The anticoagulant from these bats’ saliva has been synthesized and is now used in medication for human heart patients, showing that even vampire bats can be helpful to humans. However, when these bats feed on livestock, they can spread diseases and must be controlled.

How do scientists study bats?

Just like scientists who put radio collars on wolves and dolphins, bat biologists also radio-tag bats using exceptionally small transmitters specially designed to be carried by bats. Once the bat has been tagged, researchers are able to follow it while it forages and returns to its roost. Scientists also use sophisticated night-vision equipment, similar to that used by the military, in order to spy on night-flying bats without disturbing them. Researchers can eavesdrop on bat echolocation calls by using “bat detectors” which pick-up their high-frequency sounds and let the scientist know if bats are just flying through an area or if they are actually catching insects.

How long do they live?

The oldest bat caught in the wild was a banded little brown bat (Myotis lucifugus) which was 34 years old at the time of recapture. To put this in perspective, a bat living longer than 30 years is equivalent to a human living longer than 100 years. Bats, for their size, are the world’s longest-lived mammals. Yet unlike other mammals of their size, bats have very low reproductive rates, females of most species producing just one pup per year.

Where do bats live?

Not all bats spend their days roosting in caves. Some roost in trees, abandoned mines, buildings, bridges….the list goes on and on. Actually, the variety of bat roosts reflects the amazing diversity of bat species. Bats are highly opportunistic and have adapted to their environments in creative ways in order to take advantage of the many shelters available to them. Southern yellow bats (Lasiurus ega) roost in the hanging dead fronds of palm trees. Other bats, such as Honduran white bats (Ectophylla alba), chew the midribs of heliconia leaves in order to collapse them into waterproof tents far above the grasp of their predators. Evening bats (Nycticeius humeralis) raise their young under the bark of trees. Some bats even take shelter in the abandoned homes of other animals. For example, the big brown bat (Eptesicus fuscus) occasionally lives inside woodpecker holes in giant cacti. In southeast Asia, tiny club-footed bats (Tylonycteris sp.) roost inside the hollow joints of bamboo stems once occupied by beetles. In Africa, small wooly bats (Kerivoula sp.) use spider webs as roosts. Each species has its own special requirements. Many bat populations are threatened due to loss of their specific roosting habitats. Scientists have studied the roosting requirements of a number of bat species in order to provide appropriate artificial homes for bats. These homes are called bat houses and have proven to be very successful for some species, if placed in appropriate locations.

How large are bats?

The largest bat living in the United States is the western mastiff bat (Eumops perotis), weighing approximately 2 ounces. It has a wing span of nearly 2 feet. However, other bats in the world can be much larger; one fruit-eating flying fox (Pteropus vampyrus) has a wingspan of six feet! The smallest bat lives in Thailand and is called the bumblebee bat (Craseonycteris thonglongyai). This insectivorous bat has a wingspan of only 6 inches and weighs less than a penny.

What are flying foxes?

The common name “flying fox” refers to a group of bats living in the Old World tropics of Australia, Africa, Asia, and the South Pacific Islands. These bats received their common name because their faces resemble those of little foxes. They have large eyes because they do not use echolocation. Instead, they depend on vision and their keen sense of smell to find ripe fruit. Flying foxes help the ecosystems in which they live by pollinating many flowers and spreading seeds to new locations, especially aiding in rain forest regeneration.

It is important for people to remember that bats are wild animals and should be allowed to live in their natural environments. In fact, it is illegal in many countries to have a bat as a pet. Bats that can be caught are most likely sick and they should not be handled.

Guano is the collective term used for bat or bird droppings or feces. For many years, people all over the world have been using guano to fertilize their crops. Today, scientists also are able to extract enzymes from bacteria which live only in guano in order to make laundry detergents and other valuable products.